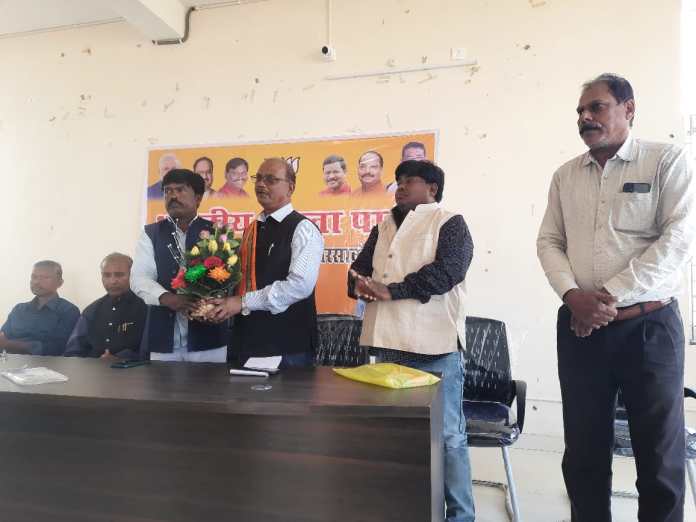 Seraikela, Nov 19:  BJP District President Vijay Mahto chaired a working committee meeting at the party’s district office in Saraikela that was also attended by former Speaker of Jharkhand Legislative Assembly and chief guest on the occasion, Dinesh Oraon and District Organization In-charge, JB Tubid. The meeting discussed several issues on prevailing corruption, financial irregularities, declining state of law and order besides others. Discussions were held on the rally-cum-huge protest demonstration programme to be organized on Tuesday, November 22 in front of the Deputy Commissioner’s office.

The BJP District President, Vijay Mahto, while emphasizing that it was everyone’s responsibility to make the protest-demonstration rally successful, said, “Everyone will gather at Seraikela Guest House Ground on Tuesday, November 22 at 10:00 am. From there a procession will commence to the DC’s office.”

District Organization in-charge, JB Tubid said that more people would have to be made aware about the rally-cum-demonstration programme slated for November 22. “This is necessary so that more people are in the know come out onto the streets to protest against the incompetent state government.”

The meeting decided that it was necessary to draw the attention of the administration on local issues like the Icha Dam case, murder of Mohan Murmu, sand smuggling, unharnessed sale of brown sugar and nonpayment of pension.  BJP leaders Ganesh Mahali, Ramesh Hansda along with former Assembly Speaker Dinesh Oraon also presented their views in the meeting. The meeting was conducted by District General Secretary Rakesh Singh and the vote of thanks was offered by Madhu Gorai.

ABOUT US
The Avenue Mail published from Jamshedpur covers all the latest news on a real-time basis of Politics, Crime, Administration, Judiciary, Sports, Industries & Business, Lifestyle, Corporate affairs, Tata Steel, Education, Entertainment and Jamshedpur city issues, Complete analysis from expert columnists that gives you insight into latest news and information.
Contact us: [email protected]
FOLLOW US
© 2022 The Avenue Mail All Rights Reserved.