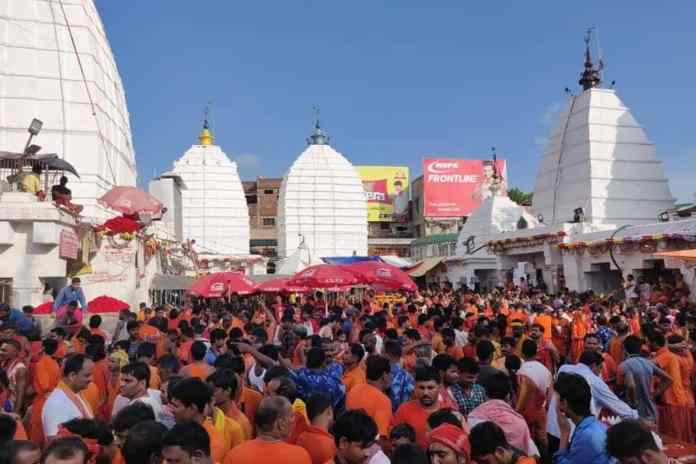 The world famous one-month long Shravani  Mela of Baidyanath  Dham starts with the drizzle of Pavas (Rainy) season. The influx of saffron-dressed Kanwariyas, pouring water into an  embellished   Kanwar   from  Sultanganj’s north-vahini Ganga, walk barefoot on a 111 km long invincible path with the deafening sound of “Bol Bam” towards the Baba Baidyanath  Mandir in Deoghar. The chant of “Bol-Bam   Ka Nara Hai, Baba Ek Sahara Hai” all the way fills this rugged path with devotion to Shiva.

Baidyanath   Dham   is one of the great pilgrimage sites of Bharatvarsha. One of the  twelve   Jyotirlingas of Bhagwan Shiva, “Kamana  Linga” is located here. This Thirthsthan is famous not only in India, but all over the world. That is why every year lakhs of devotees from other countries like Burma, Bhutan, Nepal, Mauritius, Tibet, Bangladesh, Fiji, Pakistan etc come here to bow before Shiva. Shiva devotees fill water from the holy Ganges at  Sultanganj and travel to Baidyanath   Dham  on foot with a Kanwar on their shoulders and offer water to Baba Bholenath. As per  mythological legends this Holy spiritual land has its own special importance since the Vedic times.

According to Shiva Puran, Sati sacrificed her life by jumping into the Yagyakund after her father Daksha Prajapati had  humiliated her husband Shiva. Enraged by the death of Sati, Bhagwan Shiva carried her body on his shoulder and started performing the   Tandav  Nritya. The yagya was destroyed and there was a catastrophe all around. Then on the advice of the Devtas, Bhagwan Vishnu sent his Sudarshan Chakra to cut off the body into parts so that Shiva’s anger could be controlled. The limbs of Sati started falling off, which fell at total 52 places. The place, where the Hritpind i.e. heart part of Sati’s body fell in Baidyanath  Dham,  was named “Hardyapeeth”. It is also known as “Chittabhoomi” because of the cremation of the heart of Sati at the said place by Bhagwan Shiva.

Another legend about Baidyanath  Dham is related to Mahapandit and Shastra-Shiromani Lankesh  Ravan. Lankapati was such an ardent devotee of Bhagwan Shiva that many times he cut his head instead of a flower and offered it at the feet of his deity. Shiva cured him as Vaidya (Doctor); hence came to be known as Baidyanath (Vaidyanath).

According to another mythology, once a thought came to Ravan’s mind that he has to travel from the remote region of Lanka to Kailash, situated at the extreme end of Uttaranchal of Bharat, to see his adoration again and again. So why not convince Bhagwan Shiva and ask him to stay in Lanka so that he can always get the benefit of his darshan. For this purpose, once Ravana did relentless penance in Kailash. While Shiva could not agree, Ravan said  that  his “Kamna Ling” would be a good substitute. Shiva accepted the offer  on the condition that Ravan  must not  put down the Ling in the way, otherwise it would not proceed from there and that would be  the site of the Ling. Ravan accepted Shiva’s condition. This decision of Shiva caused a stir among the other Devtas, as it was expected to strengthen the demonic power of the mighty Ravan even more. So they made a move. When Ravan was going to Lanka with the “Kamna   Linga” through the sky route, he felt uncontrollable urination at this place called Deoghar. Coming down from the sky, he started having a piss by handing over the Shiva-Linga to Lord Vishnu dressed as Baidyanath shepherd. But this was the illusion of the Lord. Hours passed, but Ravan’s  piss did not last.

The Shepherd  Baidyanath, unable to bear the heavy burden of Shivling, installed  it on the  Chittabhoomi of Mahasati. After the   piss, Ravan tried hard to lift the Shivling; but as per  condition, he was not able to do so. Enraged, he pressed the Shivling with his thumb. Later on, Mahadev was named after  shepherd   Baidyanath and was worshiped by the local devotees. Ravan constructed a well near the  Shivling and poured water of all the pilgrimages in it. He constructed a Kund (pool), which is today situated in the form of Shivaganga.

The importance of Baidyanath  Dham has also mentioned in our scriptures. Glorifying its importance in the Padma Puran, it is said –“Baidyanath   Mahalingam, Bhavarog  Hare Shivam”. According to Anand  Ramayan, once Bhagwan  Ramchandraji himself came to Baidyanath  Dham after filling water from the Ganges and worshiped Shiva. Since then lakhs of devotees come here every day and get the desired results by worshiping the Kamana  Linga. The importance of this month-long Shravani  Mela, which takes place in the entire Shravan month, is not only on the national map, but it is also called the longest fair in the world. In any sense, the Shravani  Mela of thirty continuous  days is no less than the  Kumbh  Mela  at Prayag, Haridwar, Nashik and Ujjain,  Ganga Sagar   Mela, Vaishno Devi  Yatra,  and other fairs of South India.

With the deafening slogans of “Bol Bam – Bol Bam” by groups of Shiv Bhakt   Kanwariyas constantly moving like the waves of ocean, the spiritual atmosphere is bound everywhere. The devotees   walking hundreds of miles get blisters on the feet and suffer pain. But as soon as the Ganges water is offered to Baba, all the pain vanishes and the devotees become self-confessed.

(Author is a technocrat & academician. The views expressed are personal opinion of the author. He can be reached at [email protected] )