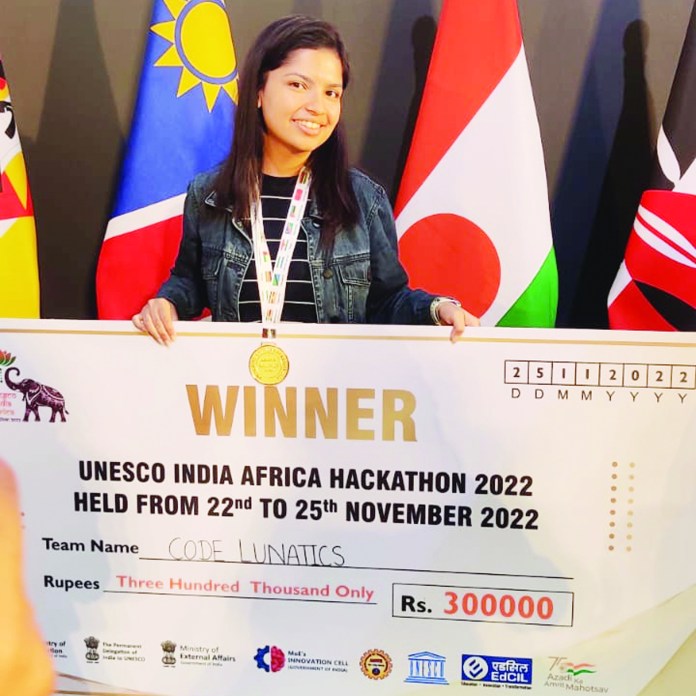 Jamshedpur, Nov 25: City girl Shreya Narayan and her team “Code Lunatics” have bagged the top honours at the UNESCO India Africa Hackathon that was being held at the Gautam Buddha University in Uttar Pradesh from November 22.

The event encouraged collaboration between students’ communities of India and African nations to develop ingenious and out-of-the-box strategies to tackle a variety of problems in various sectors. The hackathon allows the young innovators to come together and find solutions for social, environmental and technical problems faced by the collaborating nations. It also serves as the foundation for creating potential start-ups.

Shreya and her five team members from African nations like Mali, Malawi and Mauritius were declared winners of the ‘Data Collection, Analysis and Visualization App to Transform Schools’ theme in the education category. Shreya along with her teammates from African nations presented their solution and suggestions for the problem before the hackathon’s jury and were later declared winners. Shreya, the daughter of Ram Narayan, the executive president of Nepali Seva Samiti, and her team members received medals, certificates and a cash prize of Rs 3 lakh.

Code Lunatics was among the 20 teams from India and Africa that won by devising solutions through innovative software and mobile applications to deal with challenges in five sectors – education, agriculture, drinking water and sanitation, energy, health and hygiene. A total of 100 teams took part in the event with students from Indian and 22 African nations.

After emerging victorious, Shreya spoke to The Avenue Mail from the Gautam Buddha University campus: “We designed a mobile app to reduce time in collecting data students, teachers, and distance of schools from students’ homes. This data was then analysed through algorithms to ascertain the problems that might affect students’ enrolment.”

“We also used a data visualization tool to showcase the students’ performances and reasons. For instance, if all data collection parameters are all the same and only the subject teachers are different then the students are performing better in Chemistry and Mathematics, but not in Physics will highlight the problem – in this case it may be that the dip in students’ performance is caused by the teacher’s shortcoming or the method of teaching,” she added.

Shreya, a former student of Sacred Heart Convent School and Rajendra Vidyalaya in Jamshedpur, now studies at the Bangalore Institute of Technology. She along with other members of Code Lunatics will showcase their creations before prospective investors who may extend financial assistance and transform their ideas to reality. Shreya is eager to head for the next competition as this win has opened the doors for participation in other forthcoming international hackathons.

More than 600 innovators from 20 countries worked on novel ideas beween November 23 and 24 at the venue. The UNESCO India–Africa Hackathon is an annual 36 hours event that brings together students, educators, teachers, and the research community of India and its African partners to tackle the common challenges faced by their countries and also serves as a facilitator for cultural amalgamation.